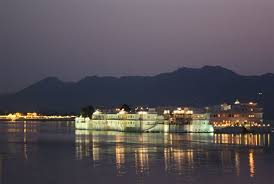 Udaipur is situated on the banks of the lovely Lake Pichola India and the lake of Fatehsagar, in Southern Rajasthan, the Eden like Udaipur, cocooned by the Aravalli Hills, is a dotted with numerous beautiful palaces, domes, shrines among other top tourist attractions. lake Pichola India is situated around the shimmering clear blue water lakes, which whisper the mood of a bygone era.

The city acquires its scenic beauty from the Aravallis. Three lakes- Pichola, Fateh Sagar and Udai Sagar make it an oasis in the desert. Udaipur is known as the ‘ City of Lakes’. The two most scenic and famous lakes of the city are Lake Pichola and Lake Fateh Sagar.

One of the most romantic cities in Rajasthan, Udaipur is also known as the city of lakes. The marble palaces, beautifully laid out gardens and the lakes make Udaipur seem almost like a mirage in the desert.
The founder of Udaipur, Maharana Udai Singh, was overcome by the misfortunes that his old capital of Chittaurgarh had to face due to repeated attacks by the Mughal armies. On the advice of a holy man, Udai Singh shifted his capital to the banks of Lake Pichola- the city was named Udaipur after him.

This marble palace that seems to be floating on the Lake Pichola is undoubtedly the main attraction of Udaipur. Now a luxury hotel, this palace can be accessed by boat from the city palace which overlooks it.
Other attractions in Udaipur include Krishna Vilas, Lake Fateh Sagar,Sajjan Niwas and Gulab Bagh, Machchalaya Magra, Doodh Talai, Jag Mandir, and the Bharatiya Lok Kala Museum.

Lake Pichola Udaipur comprises several islands that accompany the calm waters of the lake. The world-renowned Lake Palace is perfectly located on the Jag Island of this tranquil lake. Even the Jag Mandir, another destination of tourists, is located on an island of this lake. Above all, a trip to Pichola Lake would be incomplete with a boat ride. The pristine blue waters of the lake leave a soothing impact on the spectator. At the time sun-set, a boat ride in this lake is sufficient to enthrall anyone.

Pichola Lake is also called the Lake of love because many lovers come their to enjoy the beauty of the lake with their partners. It is also a family spot where you can enjoy boating with the family.