Jag Mandir Udaipur is built on the jag Mandir Island on Lake Pichola. The island is the second natural island on Lake Pichola towards the south. The unique name of the palace is derived from the last Maharana who finished the construction of this beautiful palace. Maharana Jagat singh ji was honoured by adopting his name for the palace. The palace was used by the royal family in the summer days. It was also the pleasure palace where lavish royal parties were thrown. History says that the jag mandir udaipur was used as a refuge to asylum twice. The story is interesting. The emperor who built the The Taj mahal Emperor Shahjahan and his wife Begum Mumtaj mahal were given shelter here. They stayed at the city palace and Gul mahal. Gul mahal is a part of the Jag mandir palace. Since shahjahan’s mother was a Hindu Rajput the kingdom of Mewar protected him against his campaign to his own father; Emperor Jahangir. The Indian culture of protecting ones’ daughter’s family for life long is well reflected here. The towers at the corners of the Jag Mandir udaipur Place are octagonal and topped with Cupolas. The architecture of the Jag Mandir Udaipur is definitely Mughal and Rajput in style. Both the styles need no introduction as they catch your eyes and never fade away. Special attraction of the palace is the carved Elephant statue which is placed on both sides of the entry through the beautiful and airy Lake pichola. 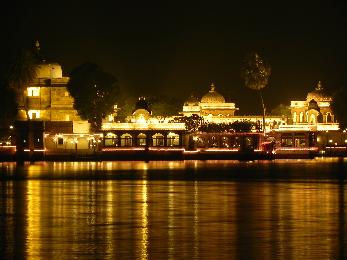 The Jag mandir palace Udaipur is reached through a gateway from the city palace. Ferries and boats row to the palace. You can enjoy a meal coupled with a drink and enjoy the sunset or the night view. The view of the palace and the lake at night can be imagined by having a look at the pictures. The crystal clear water of the lake pichola blazes in the lights of the night. This view
from the Jag Mandir is worth a million.

wordpress themes
Manage Cookie Consent
To provide the best experiences, we use technologies like cookies to store and/or access device information. Consenting to these technologies will allow us to process data such as browsing behavior or unique IDs on this site. Not consenting or withdrawing consent, may adversely affect certain features and functions.
Manage options Manage services Manage vendors Read more about these purposes
View preferences
{title} {title} {title}