The glittering white mansion standing right at the centre of the overwhelming lake Pichola is the Lake palace Udaipur. The lake palace once known as the jag Niwas is now under the flagship of The Taj hotels since 1971. Built in 1746, the mesmerising and fulgent palace was built as the pleasure palace for Maharaja Jagat singh 2. This amazing piece of construction is the pride of the entire nation. The palace was made facing the east in order to let the inhabitants pray the sun or the surya. Indian culture has great value for the ultimate source of energy the Sun. The foundation of the Lake palace Udaipur is a mighty 4 acres expanded foundation and it accommodates 83 rooms and suits. The palace has been featured in number of movies, national & international, James Bond octopussy, a worldwide known movie was shot here too. The lake palace is situated on the island of called the Jag Niwas on the Lake pichola. Amongst all the other islands and the respective palaces the Lake palace is the pioneer one. 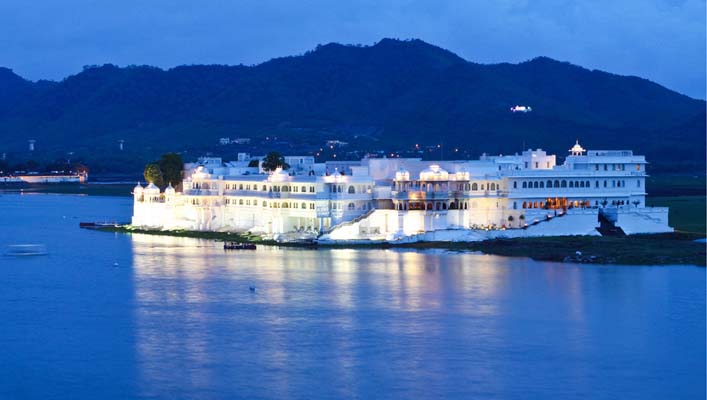 Just taking a look at the pictures of the Lake palace will take your mind to the heaven. The mind travels to the horizon and never wants to come back to the reality. Such magic is only possible in the Indian land of rich culture and heritage. The poets of the world have given this Lake palace Udaipur place in their creations and it has hence locked the aura of the palace for ages to come. The durbars of the Maharana were conducted from the palace in the summer days. The courtyard, the balcony’s, the pillared terraces and the gardens all together make it look like god’s home. Speed boats from the city palace are operated to bring and drop guests without any trouble and at regular intervals. The stay at the Lake palace Udaipur has been voted as the most romantic hotel in the world. And that says it all. Like the history the Lake palace Udaipur too has seen number of rulers and their styles of ruling. There was a time when the palace was deteriorating but thanks to the Taj group they over took the management of the hotel and it has proved to be a lifesaving event for the monument. The stay here is a never to forget experience.